Big Blue Chips Down Under

So why invest in Australian stocks? Simply put, the Australian economy has outperformed the Canadian economy. A two year chart of the All Ordinaries Index vs. the TSX Composite Index shows the trend – the gap would even be wider accounting for reinvested dividends: 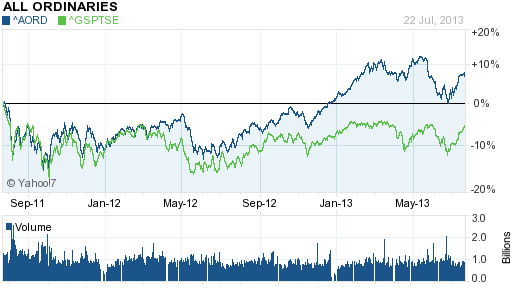 These days there are ETFs for everything, and iShares Australia has these Australian indices covered. For U.S. and Canadian investors, the iShares MCSI Australian ETF (EWA) holds some of the largest Australian blue chips, as represented in the All Ordinaries Index (S&P/ASX). These are big notable dividend payers, such as BHP Billiton, Commonwealth Bank of Australia, ANZ, Woolworths, Telstra Corp. and Westside Petroleum. The current 12 month yield for EWA is 6.35%, less the MER of 0.53%, leaves a current annualized yield of approximately 5.82%.  That’s not a bad payout by any stretch, and beats XIC or XIU hands down!

BHP Billiton Ltd. (BHP) is one of the largest companies in the world, with a market cap currently at 170.2 billion USD. Before the slow-down in China this year, and decline in the resource sector globally, BHP had made the Top-10 list. In December 2012, it was the world’s fourth largest company by market cap, valued at $247B USD. This Australian mining giant has global reach. In fact, it is the world’s largest mining and resource company.

BHP Billiton extracts a broad range of minerals and resources, including: aluminium, coal, copper, iron ore, titanium minerals as well as oil, gas, nickel, diamonds and silver.  BHP made its claim to fame with Canadians back in August 2010, with its thwarted takeover attempt of Saskatchewan based Potash Corp. (POT).

Most Australian stocks do not trade on the NYSE or TSX. However, investors may also be able to purchase these securities through global trading with their online broker. For Australian only traded securities, investors can also buy shares through ANZ share trading. Founded in 1835, Australia New Zealand (ANZ) Banking Group Ltd. is the third largest bank by market cap in Australia.

Readers, what’s your take? Have you thought of purchasing EWA or shares down under?

Disclaimer: Financial info in this article is taken from Yahoo Finance Australia, and Yahoo Finance Canada. I am not an expert in Australian securities, nor do I own EWA or any Australian stocks mentioned. I may initiate a position in BHP in the near future.

13 Responses to “Big Blue Chips Down Under”