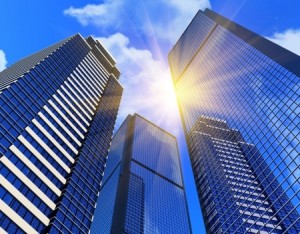 REITs, also known as Real Estate Investment Trusts, are publicly listed companies that own income-producing real estate. Their assets include hotels, shopping malls, office buildings and apartments. Originally created in 1960 by the United States, REITs have spread worldwide and have a strong presence in Canada as well. In order to qualify as a REIT (in Canada), at least 95% of its income must come from real estate assets, and at least 80% of its properties must be located in Canada.

The popularity of REITs stems from the fact that they allow ordinary individual investors a means of participating in a diversified portfolio of real estate traded on stock exchanges. The returns are also tax-efficient for investors, as shown later. From the perspective of the companies, REITs are tax-efficient in that they are allowed to distribute 75-95% of their taxable income to their unit holders. As long as their income is distributed to their unit holders, the REITs themselves will not be subject to tax.

Distributions from a REIT can be made monthly or quarterly. They are not classified as dividends, so they aren’t subject to the gross-up and dividend tax credit. The distributions actually consist of several types of return, which includes: other income, capital gains, foreign non-business income and return of capital.

Return of capital (ROC), on the other hand, is trickier from a tax perspective. Distributions allocated to ROC reduce your adjusted cost base (ACB). When you eventually sell the units, the ACB will be subtracted from the proceeds of distribution to arrive at your capital gain/loss. Once your ACB reaches zero, any ROC distributed will give rise to a capital gain. It’s essential to note that capital gain distributions are different from a capital gain that results from selling the units. The former takes place monthly and is a result of the REIT disposing of its assets at a gain, while the latter is triggered only when you personally sell the units.

Most of the time, your ACB will be positive and any ROC distributed to you won’t be taxable immediately. In a way, you are receiving income but deferring tax on it until a later point in time. Here is an example to illustrate the tax-deferral benefit of REITs. Your ACB is $500 and the REIT pays a distribution of $100 per year for 5 years, of which $50 is income and $50 is return of capital. Of the $100 annual distribution, you will only be taxed on half of it. The other half will reduce your ACB until the fifth year when your ACB is $250. When you sell the units after the fifth year for $1,000, you’ll have a capital gain of $750 ($1,000-$250). Essentially, you’ve deferred paying any tax on the return of capital until year 5.

The fact that the ROC reduces your ACB and isn’t taxable unless your ACB is negative is attractive to unitholders. It’s a type of tax-deferred return, similar to how the tax liability in a RRSP is deferred until withdrawal. The downside is that you will have to keep track of your ACB manually for when you eventually sell the units. Canadian unitholders will receive a T3 from the REIT or your broker which breaks down the amount of other income, capital gain and return of capital. The T3 will help you keep track of your ACB.

Canadians can either buy a REIT directly, or hold a diversified portfolio of REITs in an ETF or mutual fund. REITs are qualified investments in non-registered and registered plans, such as the RRSP and TFSA. The section above described the taxation of REITs in a non-registered account. In a RRSP, distributions will not be taxed until withdrawal, at which point the entire withdrawal will be treated as income and taxed at your marginal tax rate. In a TFSA, neither distributions nor capital appreciation will be taxable. You will be able to withdraw your entire contribution tax-free.

If you hold US or other foreign REITs in your portfolio, withholding tax will be applied to some of the distributions. Generally, you can recover this withheld amount in a non-registered account by claiming the foreign tax credit. However, the withholding tax is not waived in a RRSP or TFSA. As a result, the withheld amount will be lost forever. Withholding tax is just one of the factors to consider when deciding to allocate REITs in registered or non-registered accounts. You also have to consider about your marginal tax rate and the proportion of each type of return from the distributions.

At a time when everybody is looking for yield, investors will find the distributions of REITs appealing. If you are interested in REITs or already hold them in your portfolio, this post should clarify how they are treated from a tax standpoint. Please seek a tax professional and financial advisor if you require assistance with your current situation.

Brian So, CFP, CHS, is an insurance broker and blogger at briansoinsurance.com . Follow him on Twitter for his musings on life insurance and why the Vancouver Canucks will win the Stanley Cup next season (Seriously).