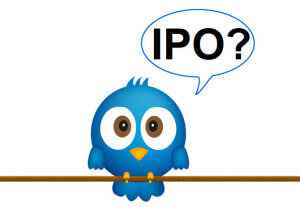 Much buzz has been hitting the business news today regarding the IPO (Initial Public Offering) of Twitter.

It’s no surprise investors and traders are interested in getting a piece of the action, especially after the large-scale IPO’s of Facebook and LinkedIn. Twitter is essentially the last big social media giant left to invest in. Together, these three social-media giants dominate the current web and mobile landscape.

Of these social-media giants, Twitter is probably the best positioned and integrated in the ever evolving mobile landscape. It was right from the start.

Personally, I much prefer using Twitter over Facebook. Twitter’s online practices are far less secretive and insidious than Facebook. Twitter is easy to use, and works seamlessly on mobile devices. It also has brand recognition and massive global reach. According to the Alexa Ranking, Twitter is the 10th most used website in the world, with Google in the No. 1 spot, Facebook being 2nd, and LinkedIn being 8th. Twitter is a significant influence on the web and our modern life, with over 215 million active monthly users.1

I’ve never been a Facebook fan, but I’ve always enjoyed using Twitter. For me Twitter is also one of the best toolboxes in my blogging and web empire. When I write a post, I can immediately let over 2100+ followers know there is new material on my website, and that gets retweeted and mentioned. In fact, Twitter is my 3rd highest source of referral traffic on the Dividend Ninja, and is far ahead of the traffic I receive from Facebook. It obviously provides a net-benefit for those of us who use it.

While I’d love to throw some money on Twitter to see what happens, that is really akin to gambling. A purchase in Twitter does not fit into my long-term dividend growth strategy, and I doubt it fits into an index investing strategy either. It may be a solid Fortune-500 dividend payer when I’m 55, but at the moment it’s nothing more than a new IPO.

Looking at the fundamentals, Twitter is hoping to raise $1 billion dollars through the IPO. According to a couple of articles in the Globe and Mail (referenced below), the fundamentals for Twitter are far from pretty. Twitter has never generated a profit1, and in the first six months of 2013 posted a $69.3 million dollar loss.2 In addition it has acquired a net deficit (that means debt) of over $418.6 million dollars.2

While it may be one of the most popular websites in the world, its 215 million monthly users are paled by Facebook’s 1.1 billion monthly users.3  When you start to peel off the glitz there really isn’t a lot under the Twitter hood, other than its name and monthly users. Twitter is estimated to be a $1 billion dollar IPO, without profit or revenue, bleeding millions of dollars per month, and carrying over $418.6 million in debt. While a gigantic cash infusion would likely breathe new life into Twitter, the real question is will it be enough? Much like the Facebook IPO, Twitter also has an unknown revenue model with a lot of future uncertainty.

If you like day-trading, and roller coasters then this IPO is for you. I covered the Facebook IPO in an extensive three-part series back in May 2012. Facebook was offered at an initial IPO price of $38, sank to $34.03 at the end of trading day. Shares of Facebook would have even slid further, if the underwriters didn’t step in to prop up the price. Investors who bought on IPO day likely paid over $40 for their shares.

In the months that followed shares of Facebook sunk to a low of $18.06. Facebook has indeed been a turnaround company, with shares now trading at $51.04 per share. Analysts are now starting to see fundamental value in the company. However for those investors who bought on IPO day, and had the super-human fortitude to hang on, it’s been a gut-wrenching and nail-biting ride.

The same can be said for investor who also bought tech IPOs such as LinkedIn and Groupon. Again LinkedIn has been another success story, but it was also another gut-wrenching ride for investors from IPO day. Groupon shares sank below $3 months after the initial IPO price of $20 per share, although they have since rebounded over $11 per share. Point being tech IPOs (as with any IPOs) are risky. Can you handle this kind of volatility?

I’m sure Twitter shares will soar on IPO day, and investors and traders will make small fortunes in the weeks and months to follow. However I’m content to sit on the sidelines. I’ll collect my dividends from my solid blue-chips, and wait this one out. Although I love Twitter, I won’t put my money on it. 😉

Reader’s what’s your take? Are you buying Twitter on IPO Day? Do you think Twitter is a good investment?